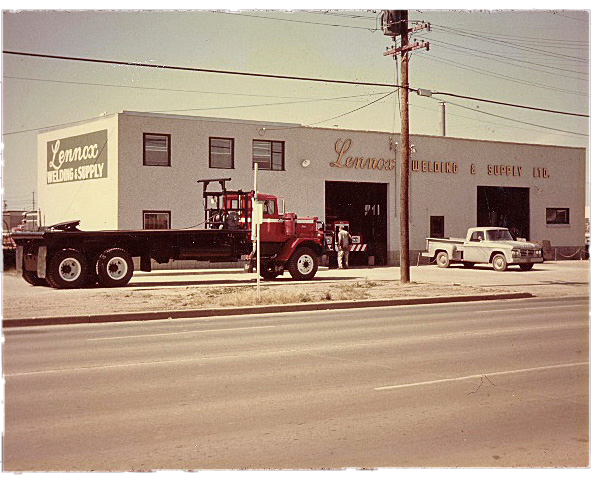 In the late 1940s, the discovery of large patches of oil beneath Alberta’s soil led to a rise in oil production. In response to the growing need for a local manufacturer of custom-made oilfield truck equipment, Clarence R. (Len) Lennox and Ted Hunter came together to build Lennox Welding and Supply. After Len’s departure early on, Ted took over ownership and continued to supply the industry with exceptional service and custom Rig Ups.

Lennox Welding and Supply has had many long-term members of staff contribute to its success:

1970s: Ted Hunter’s sons, Gord and Jim, joined the company.1980s: Kent Hunter became a valuable member of staff.1990s: Karen Hunter joined as the office manager.2000: After nearly thirty years, Jim announced his retirement.2003: Ken Moffitt became a part of the management team.2008: With nearly forty years of service with the company, Gord retired. Upon his retirement, Kent Hunter and Ken Moffitt became the sole owners. With their knowledge and years of experience, Lennox Welding and Supply was left in capable hands.

Since its foundation in 1953, Lennox Welding and Supply has grown considerably.

When the company first opened, it operated out of a one bay shop, south of Edmonton. However, as the need for larger rigged trucks increased, additions to the original building were necessary. As traffic on Gateway Boulevard become heavier, manoeuvring long rigs in and out of the property became extremely challenging. This prompted Lennox Welding and Supply to find a new location. In 2011, a larger property was purchased in Sherwood Park, which allowed for easier access.

Construction began in 2012 and was completed in 2013, providing the company with more than 10,000 feet of shop and warehouse space.

On the 60th anniversary of Lennox Welding and Supply’s establishment, the team officially relocated to its new premises with ten 70-foot bays and room for future expansion.

To ensure the safety of our customers and staff, we request scheduling of any in person appointments, including drop-off and pick-up of parts, to maintain social distancing and reduce overcrowding within the shop.

We are all eager get back to a normal routine, so lets continue to be vigilant with distancing measures, good hygiene and disinfecting practices!